She walked into the class and noticed right away that no other students looked like her.

All men.  Many seemed to already be acquainted, or in a few cases, fast friends.  Clearly they’d been through similar classes before.

And halfway through the class, her fears were realized; everyone was more experienced than she was.  More skilled.  More at ease.  More confident.

She stumbled again.  What was she doing here?  She didn’t belong, and of course everyone knew it.

What were they thinking?  Were they amused at how out-of-her-element she was?  Annoyed that she was taking up space that could have been filled with someone more competent, someone that belonged here?

Were they staring at her?    No, wait, they were pretty much ignoring her.  For a moment, she was unsure whether she wanted to blend in or be just wholly invisible.

And yet she came back to the class again the following week.

“Hi,” she stammered to a couple of the guys.  Hmm, had she just interrupted their conversation?  Did they even hear her?  No response.

Others were immersed in their phones. Let’s see, greet the new girl or read more Facebook posts?  Clearly no contest.

She thought about not going back.  All those guys probably would probably be happier anyway if a lone girl wasn’t invading their space.  They’d feel more free to be themselves, to make guy jokes, to share guy gossip.  And she just wasn’t doing very well in the class anyway; she wasn’t cut out for this.  Yes, it was interesting, yes, the subject matter was fun, yes, she had just as much right to be there as anyone else.  But why persist where she wasn’t wanted?

Plot twist!  This was actually about a guy in a class that was otherwise 100% female-attended.  The class? A weekly ujam dance fitness workout.  The guy?  Me.

Even crazier?  I was actually thinking and experiencing everything described above.

Absolutely ridiculous, right?  I’m a white, middle-class guy who was taking a totally optional, pretty inconsequential group exercise class.  My livelihood wasn’t at stake.  This wasn’t about a college education or a job or anything else critical like that.  Not to mention that this was just a once-a-week thing.

And as I thought about how embarrassingly ludicrous my feelings were, a lightbulb went on in my head:  Holy crap, these feelings… these worries… this discomfort… this was just an extremely tiny taste of what a lot of my black / Hispanic / female friends have faced regularly in their lives.  First day on the job as a software engineer.  At tryouts for a symphony orchestra position.  Attendee at a tech conference.  Faced with a sea of white faces–often predominantly male–wondering how others are judging them.  Oh, that Hispanic guy must be on the cleaning crew.  That woman is obviously booth babe, not a mechanical engineer.

Every fricking week, maybe even every damn day they’re faced with crap like this.  And don’t even get me started about online harassment :\.

On one hand, I laughed when I thought about how silly my “aw, poor Adam, feeling insecure in a gym class!” feelings were.  But then when I realized that this was just a very, very, very watered-down taste of what my friends regularly dealt with, it was no longer funny.  Just sad.

Thankfully, I truly believe that–at least in the U.S.–the ‘younger generation’ is far more open-minded and embracing of diversity than the generations that came before it.  Interracial couples, close friends of different races, not just tolerance but full-on acceptance of gay marriage, and so on.

But we shouldn’t have to wait for all of us old(er) farts to die off.  We should find a way to make more people feel welcome in every aspect of life, not only in hugely meaningful ways, but in small, mundane ways as well.  I’ve often winced when I’ve heard the phrase “check your privilege,” frankly, but perhaps we could all question our assumptions, force ourselves out of our comfort zones (in what we read, think, and do), and do our best to recognize how our preconceptions and fears can be hurting other people.  More positively, we could make more of a daily effort to be genuinely welcoming to individuals who don’t look like us.

And yes, in the meantime, I’ve been continuing to go to ujam.  I still sometimes wonder whether people are secretly laughing at my body roll attempts (or my more literal body rolls), but now I smile when I consider how such trivial discomforts have sparked me to think a bit bigger… and to finally write another blog post here :).

P.S. — Seeing the latest Disney movie, Zootopia, almost certainly played a role in spurring me to write this. What an amazing film in all respects, in no small part due to its sly, funny, and deeply thoughtful take on race relations, diversity, and related issues.  GO SEE IT!

P.P.S. — My friend Rachel sent me a link to this cartoon which I think speaks volumes: 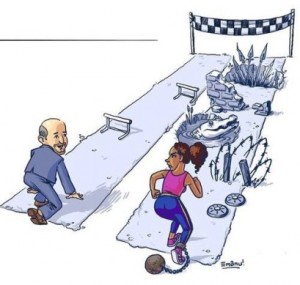 Anyone know where this is from? I’d love to link & give full credit (and yes, I Googled!)

What do you think? Cancel reply

Get new posts by email or RSS

Drop me a note at [firstname]@[lastname].net :)